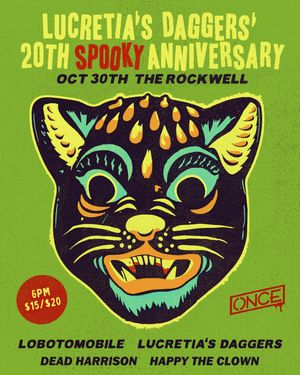 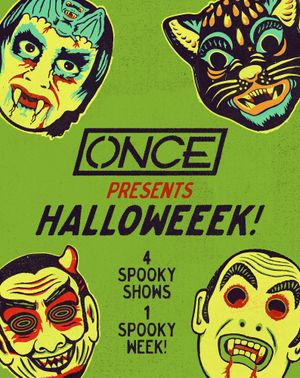 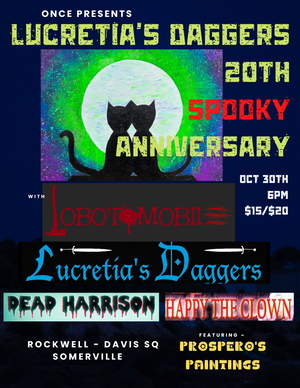 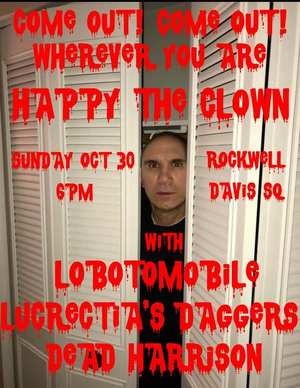 It's been too long since we last spoke. But there was good reason! After Maxx Charvelle's departure in December 2021, we immediately found a guitarist/master laptop tracks maker extraordinaire in one HORACE GRIMSBY!

CHECK OUT ABOVE FOR OUR SPECTACULAR HALLOWEEN SHOW IN OCTOBER! 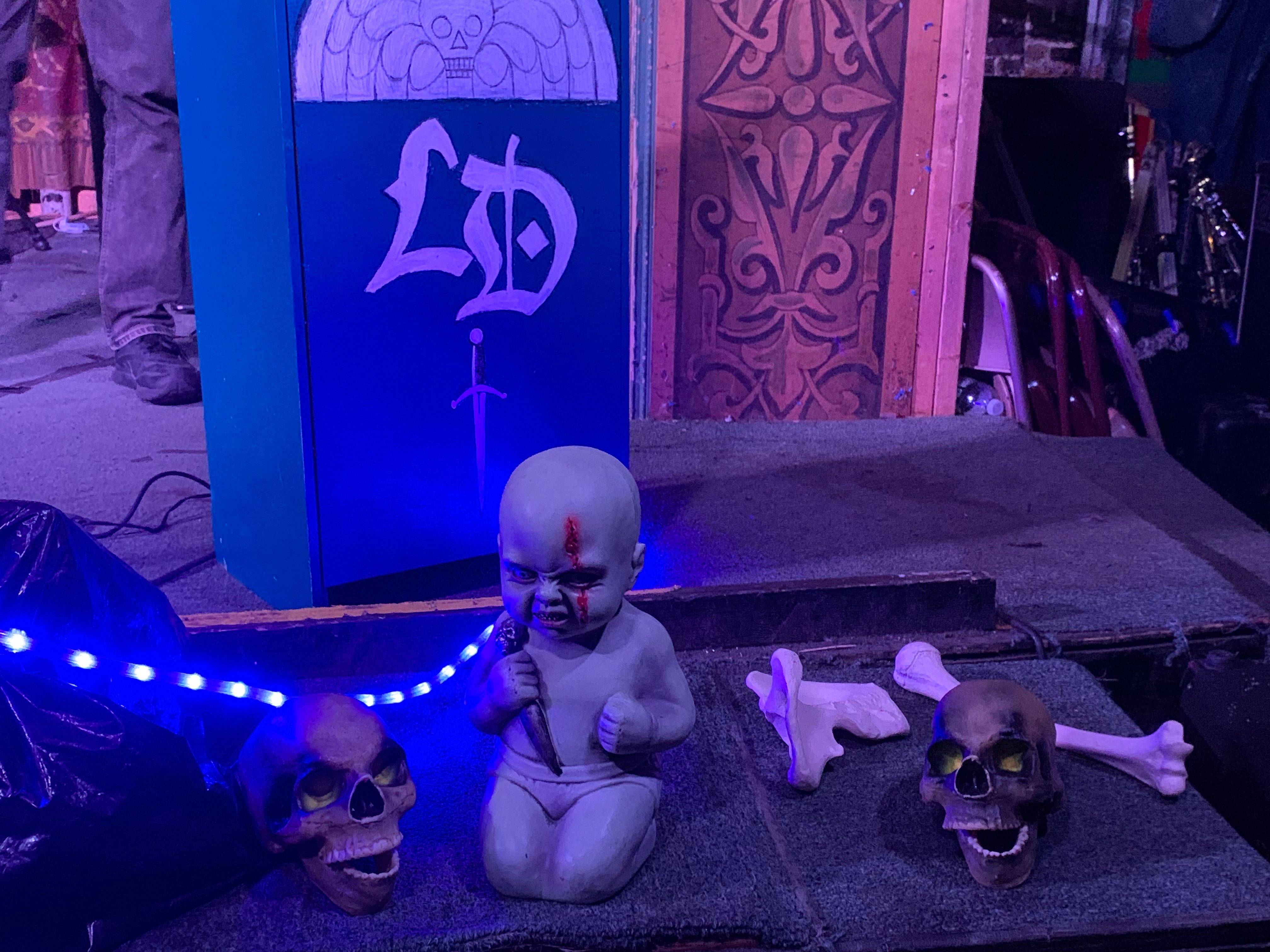 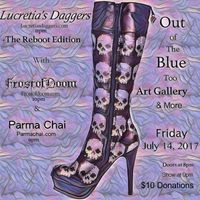 Out of the Blue Too Art Gallery & More , 541 Massachusetts Avenue , Cambridge

LET'S KICK IT! LD's back with a new lineup.

Opening for us -- our beautiful & colorful female-fronted friends:

Celebrate the Gallery by donating $10 (or more) to the cause.

Cambridge, MA: Come party with dark lyrical electro-rockers Lucretia's Daggers & friends on Thursday, July 3, 2014 at the Middle East Club Upstairs, Cambridge, MA, for the release of their music video "Public Transit," filmed on the MBTA and at The Garment District by Amanda McGrady. This snarky companion track to "The Horrors of Retail" features local Boston-area fans, including Anderson Lynne Mar, the late "itinerant frontman" of punk band Sans Nomenclature and manager at School of Rock Boston. Anderson will also be honored in a video picture tribute by Krista Michaud-Bernier. Performing live are bands/friends Anders booked through her Dark Sky Productions company:

Also featuring: Rock 'n’ Roll/Anders-inspired art by Mark Frank (nnuu) and Prospero Eaton, and free giveaways: a "scandalous" prop from LD's video (in which Anders appears) and some of her personal memorabilia.

Join LD and friends for a celebration of Anders' life and contribution to the Boston/New England music scene 2002-2014 on the long Independence Day weekend. Tickets are $10 in advance, available from bands; $10 at the door. 8pm doors, 1:30am close.

Dead Harrison: Dead Harrison is a three-piece band from southern New Hampshire. The trio consisting of bassist Skulls, guitarist Shaun, and drummer/vocalist Drae has an upbeat yet doomy sound, pulling from influences of Black Sabbath, Type O Negative and the Misfits. Think stoner rock with a dash of punk and metal. With story-like songs about love and death and the joining of the two, Dead Harrison share a sonic therapy for all. These guys plan to leave a legacy. http:www.reverbnation.com/deadharrison

Echo Weapon: With 25+ shows under his belt, Echo Weapon is a one man project influenced by NIN, Marilyn Manson, and Joy Division. Sounding like Tears for Fears meets Smashing Pumpkins meets Mad Max, Echo Weapon is a whirlwind of crunchy electro grunge/rock with powerful haunting vocals and guitars over a drum machine. Recently featured on Punk FM television, he is 80% done recording his first album. He also likes to slappa da bass...and rocks with the strength of many ninjas! http://m.soundcloud.com/brian-zakrzewski

Marcelo Carboni: A transplant from Brazil, soulful vocalist/songwriter Marcelo Carboni folded his eight-year-old hard rock metal Boston band silencio and started his acoustic project in order to give his eardrums and throat a break. Expect some Bossa nova… slow samba….Everything from Talking Heads’ “Psycho Killer” to a-ha’s “Take on Me”…and some originals as well. http://www.youtube.com/watch?v=HBvLtA9ye3A

with local support from:

Tickets $10 advance ($12 door), 21+
Buy your tix directly from the band at lucretiasdaggers@rcn.com
or online: http://bella2012.eventbrite.com

Ego Likeness are an electrogoth/darkwave band formed in Baltimore in 1999 by artist Steven Archer (guitar, vocals, synths, programming) and writer Donna Lynch (vocals, words, piano).  Supporting Ego Likeness for this show are the best of Boston's female-fronted bands: Sans Nomenclature -http://www.sansnomenclature.net - If you've ever been jonesing for a band that sounds like "The Misfits-mated-with-The-Dresden-Dolls," Sans Nomenclature (thusly named because they are "without a label") is up your alley! Serving up a heavy helping of socio-politically-infused theatrical punk rock and imploring the populace to think for themselves, Sans could very well be the next affront in the revolution! Lucretia's Daggers - http://www.lucretiasdaggers.com - With a namesake derived from '80s cult band The Sisters of Mercy, Shakespeare/Livy-penned poetic biography, and 16th c. Borgia legend, Boston, Massachusetts' musicians Lucretia's Daggers blend darkwave, synthpop, and ambient metal with dramatic female vocals and have brought an arty touch to their "dark lyrical electro-rock for the apocalypse" since August 2001. Liz Borden - http://www.thelizbordenband.com - Sporting wispy pop harmonies and a giant, three guitar wall of sound, the group vacillate from Ramones-style power chord, to melodic complex songs and then pummeling to an even more ferocious kick ass rock and roll. ATTENTION! THE CANTAB HAS LIMITED SEATING CAPACITY, SO PLEASE CONSIDER PRE-PURCHASING YOUR TICKET BEFORE THE SHOW. TIX WILL BE $12-15 AT THE DOOR. GET 'EM NOW FOR JUST $10. http://www.ego2011.eventbrite.com http://www.cantab-lounge.com

Join LD (11pm) and friends for a punk/metal/electronica night at our
debut with guitar/synth master Otto von Kinzel.